Pruritus is an itch or a sensation that makes a person want to scratch. Pruritus can cause discomfort and be frustrating. If it is severe, it can lead to sleeplessness, anxiety, and depression. The exact cause of an itch is unknown. It is a complex process involving nerves that respond to certain chemicals like histamine that are released in the skin, and the processing of nerve signals in the brain. Pruritus can be a part of skin diseases, internal disorders, or due to faulty processing of the itch sensation within the nervous system.

There are many skin diseases like urticaria (hives), varicella (chicken pox), and eczema which may have itching associated with a rash. Some skin conditions only have symptoms of pruritus without having an obvious rash. Dry skin can itch, especially in the winter, with no visual signs of a rash. Some parasitic infestations such as scabies and lice may be very itchy. Itchy, pigmented moles may be a sign of a malignant change.

Pruritus may be a manifestation of an internal condition. The most common example is kidney failure. Some types of liver disease like hepatitis, thyroid disease including both hyper (too much) and hypo (too little) thyroid hormone levels, some blood disorders such as lymphomas, iron deficiency anemia, polycythemia vera, multiple myeloma, and neurologic conditions such as pinched nerves and post herpetic neuralgia can cause itch. Infectious diseases like HIV can cause severe itching. 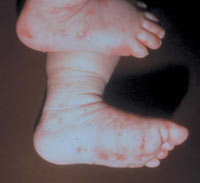 How is Pruritus diagnosed and treated?

Often the dermatologist will be able to diagnose these conditions with an examination; however, to determine a specific cause of the itch, a blood test, skin scraping, or biopsy may be needed to help make the diagnosis. If the itch is due to a skin disease such as hives or eczema, treatment of the skin disease, itself, with prescription topical medications and/or oral antihistamines generally relieves the itch. If the itch is secondary to an internal disease, patients may require treatment of the disease, oral medication, or occasionally ultraviolet light therapy to relieve the itch.

Sometimes, the dermatologist will prescribe a cooling topical lotion or cream and/or an oral medication to relieve the itch. Pruritus is often disrupting and difficult to control but usually responds well to treatment. While a specific identifying cause for the itch may not be found, an appropriate work-up to exclude internal disease should be completed.

Although there are many causes for pruritus, some basics apply to most treatments: